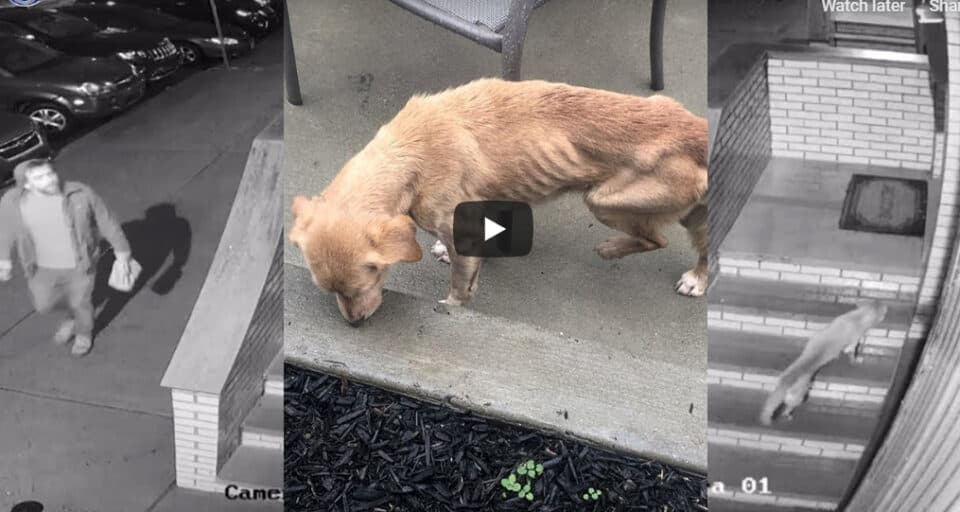 It was a stormy night in Philadelphia when just after 3 a.m., the wind blew open the door to the home of Jack Jokinen, a New York Yankees fan who hosts the George’s Box podcast. As fate would have it, an injured and malnourished dog seeking shelter is shown on surveillance video walking by. After wandering in and out a few times, she decides this is a safe place to spend the night.

Jokinen recalls walking his other dog, George, just a few hours prior and remembers coming home, shutting the door and securing it with an electric lock. Apparently, the door did not close all of the way and the early morning storm blew it open while he, his wife and one month old baby slept upstairs – completely unaware of the situation unfolding.

But the story doesn’t end there. Enter the good samaritan, who would later be identified as 35 year old Steven Griendling. Not 30 minutes after “Suzy” wanders in, that same surveillance camera also captures a stranger walking by who notices the open door.

“Yea, I was just walking by, it was raining. I saw the door open. I passed by it, then I just doubled back and kind of peeked over the stoop and looked inside and saw all the lights were on–which I thought was weird,” said Griendling. He closes the door and makes his way home.

Jokinen told Action News that his wife came to him the next morning with the new development. ‘”The baby is ok”, she says, “but there is a puppy in our house.” Jokinen states, “There was a puppy sitting there, wet, cold, shaking and afraid.”

I just woke up to this puppy in my house and we have no idea how it got here. pic.twitter.com/OZMystNsZE

What to do about “Suzy”?

There were two options: take the dog to the shelter … or take her to a vet. The decision was pretty easy to keep the dog. “With all these circumstances that came together, how do you not keep this dog,” Jokinen said. That dog is now named “Suzy” after Yankees sportscaster, Suzyn Waldman.

Jokinen says she walks on three legs due to a paw infection, she has an infection in her teeth, is extremely underweight and has a flea and tick infestation. She was also not microchipped, veterinarians said. “The goal is to get Suzy healthy,” says Jokinen, who has received over $8,000 is donations after posting about it on social media. Any leftover money, after Suzy gets the help she needs, will go towards a good cause to help other animals.

Not long after, Jokinen posts to Twitter and following FOX29 Philadelphia’s coverage of the story, they found the good samaritan!

i apparently may have daved a dog’s life by just being a good neighbor and shutting their door that they left open. i’m speechless. and also crying 😭 https://t.co/5Tfx2lYSeO

Jokinen and Griendling will be reuniting soon to meet face-to-face for the first time. For Jokinen, he just wants to say thanks.”My family could have been murdered if it wasn’t for this guy,” he says.

By the way @irish_gambino is single. Anyone in Philly looking for a hero? pic.twitter.com/yVoTDxXfXr

The Internet comes together to help the Jokinen’s help Suzy!

It didn’t take long for the story to go viral and for every news station to start reporting on this amazing story. The Jokinen’s had no idea what to expect from Suzy’s vet visit or what issues they may face, but financially speaking? The goal has been met … and then some. Following getting Suzy back on track, the Jokinen’s say they will donate the rest to helping more dogs just like Suzy!

Suzy just got a big delivery from @Chewy and is excited to dig in pic.twitter.com/yQ0KZHc48m

“Joniken tells the NY Post, “We’re gonna turn this negative into a positive for the holiday season,” he said, claiming that people inquired about donating to Suzy’s recovering fund — as she has fleas, ticks and a heart murmur, among other ailments.

As of Tuesday, more than $19,000 was donated to the dog’s recovery, WPVI reports. Jokinen said any leftover money will be donated to help other animals in need.

“Suzy is on the mend. She is starting to fill out and get some more energy. She’s adapting well to her new home and just loves being loved,” Jokinen told the news station. “We are planning out the next steps for procedures she needs treating her paw infections and hookworm.”

Jokinen notes his family didn’t expect Suzy’s arrival, but said in his video that of “all the bad things that could happen when your front door is left open, to end up with a sweet dog who just needs a good home, I mean — wow. This could’ve gone a lot worse.”

We’ll continue to keep you updated as the situation evolves. In the meantime, be sure to follow Suzy and her brother, George, on Instagram (you can click the images to go straight to the profile). Checking on her is the first thing I have done every single morning since learning of her incredible story. You will fall in love with her 🙂

We get closer every day ❤️

Meet Lotus, the Giant Maine Coon Cat Who is Taking Over the Internet!

Hi there! My name is Aimee Stock and I am the owner and creator of ProjectPAWS.org. A former veterinary practice manager for over 12 years, a former food blogger for over 6 years, lifelong animal lover now embarking on my passion project with this blog. If you have any questions of concerns about the site (or just want to say hello), feel free to email me at: [email protected] I'm so happy to have you here :)

Meet Lotus, the Giant Maine Coon Cat Who is Taking Over the Internet!